It’s that time of year again. The leaves are changing, the birds are chirping, and there is a slight chill in the…

Wait, what the hell? Does this sound like a Handys blog?

You can bet that we would not put our stamp of approval on garbage like that, after all, we have standards. At Handys, we have made our mark by being different, we are like the Fonzie of breakfasts. Did anyone ever tell Fonzie what to do? Heck no. Did Fonzie care what everyone else thought? Nope. Was Fonzie cool? Cooler than a hairless yeti. The dude jumped over a shark in a swimming pool with his motorcycle for pete’s sake, how do you argue with that? 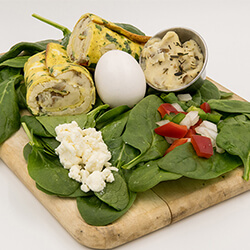 The Genesis of Handys

During the development phase for the Handy, we looked around at what was available for breakfast and immediately fell into a deep depression. We locked ourselves in an apartment just off of the CSU campus and subsisted on gorditos and really soft avocados, if you wait long enough, they just become guac. We were obsessed with finding the perfect breakfast and vowed to stay in seclusion until, “lighting strikes” as they say. The days passed and we still could not come up with the perfect breakfast. It had to be portable, satisfying and taste amazing. The epiphany came to us late one night, surrounded by gas station burritos of all shapes and sizes. We had long flat ones, short round ones and even one that curved to the left a bit. As good as a premium gas station burrito can be, none of them were what we would call satisfying. They were not exciting, there was gluten literally dripping from everywhere, we had trouble determining the contents, and then it hit us like a ton of bricks. Eggs. Eggs were the awnser… and fresh ingredients… smothered in savory sauces. And with one fell swoop, the Handy was born.

Proud To Be Different

You see, we are anything but ordinary, and like Fonzie, we take pride in that. We proudly wear the leather jacket and chase off inferior breakfasts with switchblades and bike chains. We are proud of our unique take on the mundane breakfast and we know you will love it too. We wake up every morning determined to change the way our customers think about breakfast. We are truly trying to change the breakfast landscape in Fort Collins and that means thinking outside of the tortilla. Choosing the fillings of your breakfast burrito is not generally an option, it is either sausage, ham, or bacon, and we thought that was stupid. We offer a huge (huge) variety of fillings and sauces to make your Handy tailored just for you. After all isn’t being an adult about getting what you want? Like kale? Who doesn’t! You can bet that Fonzie does, and we have the freshest kale this side of Boulder. Mix it up a bit, throw in some kale, spinach, a dash of soy chorizo, and wash it down with a cup of our magic coffee. Divine. Nothing says rebel like being a vegan, but you probably have had a tough time finding good stuff to eat. Not anymore. At Handys, we have everything that a vegan would want in a breakfast. Wait… isn’t a Handy made with an egg wrap? Yep, but we also offer a vegan substitute, how awesome is that! So to all of our vegan friends, walk your dog over to Handys and fuel up before that yoga class, or power down after slacklining all morning, either way we have all of your vegan needs covered.

No matter what you want for breakfast, do yourself a favor, think outside the box. Whether you are heading to the CSU game, rolling out of bed at the crack of noon, or heading off to the Poudre canyon for the day, stop and pick up a Handy. We are also going to be out and about this fall, so look for our cart or stop by our location and say hello. Haven’t tried a Handy? We truly believe it will change the way you think about breakfast, kind of like Fonzie changed television by jumping that shark, but in a good way. After all there is nothing quite like a Handy in the morning.