It’s the weekend. Yep, no work, no classes and no responsibility. The weekend is a clean slate on which you can mold into whatever you like. You could head down to the big D for that music fest, but the reason we live in Fort Collins is because Denver sucks. (What?) Alright, alright, Denver doesn’t suck, but wouldn’t you rather spend the weekend in Ft. Party? Of course you would. You don’t need to party or stay out until dawn to enjoy the weekend, in fact, if you hit that margarita place in Old Town, you just may be out before 9 PM.

Not all of us like the nightlife, but cherish an early morning along the Poudre, a quiet sunrise from the top of Horsetooth or a brisk run at City Park. This is the way most of us over 30 experience our beautiful city, not that the nightlife is completely forgotten, just placed lower on the priority list. And that, my friends, is the great thing about Fort Collins — there is enough room for everyone. The Old Town party people, standing in the line outside of the Aggie, the brunch “culture” swarming whatever mimosa joint is cool this month, and the outdoor fanatics, loading up stand-up paddle boards, yep we have them all. At Handys Restaurant we really don’t care what you do, we just want to provide each and every one of you with the most epic breakfast available. We are the gluten free, high protein, go big, massive taste, breakfast experience, no matter if you get up at five in the morning or 11:59 at the crack of noon. Whatever you call an early morning is fine with us.

The sheer number of incredible things to do in the area make hitting up a normal pancake house a major waste of time. Handys caters to your healthy outdoor lifestyle, hell, we even have a Handy that has spinach and kale in it at the same time. I mean, who does that? The urge you may have is to cruise into the gas station on the way to the mountains and grab the ultimate extreme sport food, burritos. If you are someone who shreds the gnar or searches for beta on the new problem at Rotary, you better have a mention of burritos or tacos on your Insta. If you don’t, nobody will take you seriously and not even your Colorado flag neck tattoo can save you.

Handys Is Not a Burrito 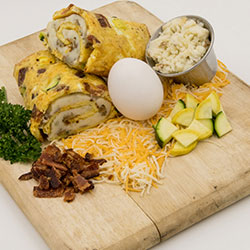 Now, at Handys we love burritos, but not for breakfast — we believe that breakfast burritos were created by the government. (Now hear us out…) Back in the ‘50s an alien craft crashed in Roswell, New Mexico and aboard that craft was technology that would change the world. Things like transistors, computer chips and Netflix were discovered upon reverse engineering what was found in the wreckage. At the back of the spaceship, next to the carton of almond milk (we knew it!), was what would become the prototype for the gas station burrito. The chalky, brittle tortilla, a molten filling surrounding a frozen nugget of even more filling, it was all there and soon was released to the public. It was not until the aught teens that the Handy came along as the undisputed, superior option to the breakfast burrito.

Take a Handy On Your Next Adventure

Due to the portability of the Handy (and its superior taste, ingredients, and lack of discernible gluten) it is ideal for outdoor pursuits, no matter how hard you go. Stop by our newest location at 1801 South College Avenue Unit C and pick up a stack of Handys for your crew. The fluffy egg wrap, packed with superior ingredients and a savory selection of sauces, will keep you full without triggering a gastronomic trailside emergency. On your way to your next outdoor adventure, stop on in or have a Handy delivered. In fact no matter what you are doing, a Handy in the morning is just as good delivered to your house as it is beside a bubbling mountain stream. If you are heading in on Tuesday, guess what? We have taco Handys on special. That’s legit AF.