Now that Handys Restaurant has taken the Northern Colorado breakfast scene by storm, we are getting more and more questions about where to get a Handy. And to that we answer, you can get a Handy delivered to you just about anywhere in Fort Collins – this is the United States of America after all! But where did the Handy come from?

The Legend of The Handy

There has been much speculation as to where the first Handy was discovered. Some say it was a hidden temple deep in the Pawnee Grasslands or from an obscure painting in a cave in Lory State Park. As local legend has it, the first Handy was given to the Folsom people of Northern Colorado by a brilliant white beam of light that emanated from a cigar shaped, glowing object floating over Horsetooth Rock. Another (more believable story) involves the discovery of a foil wrapped, burrito-like object in the tunnels under Old Town. Upon opening the dusty foil, the contents were surprisingly intact and appeared to be one the first gluten free breakfast in Fort Collins. Upon analysis, the burrito was determined to share a large amount of DNA with the common burrito but the delivery method was completely different. The tortilla was replaced by a brilliant, yet simple wrap made entirely of egg. The structure was replicated and eventually evolved into the Handy as we know it today. The legend of the Handy is alive and well in Fort Collins.

We Perfected The Handy

Regardless of where the first idea of the Handy came from, we perfected it. We take the finest ingredients and mold them into something that can only be described as breakfast perfection. Like Michelangelo with his paints, Ron Swanson and his table saw and Hugh Hefner and his bunnies, we make art. “Art in an egg wrap,” is what we should call it. It’s not like these beauties can be picked up at the gas station and eaten behind the dumpster (of course, if that is your thing, we are not judging). Nope, a proper Handy needs to be finely crafted, like a velvet painting or a 1970 Hemi ‘Cuda with a 426 Hemi. The Handy is unforgettable, like a summer breeze wafting in from Greeley, or a stunning sunset over the mountains. You never forget your first Handy. 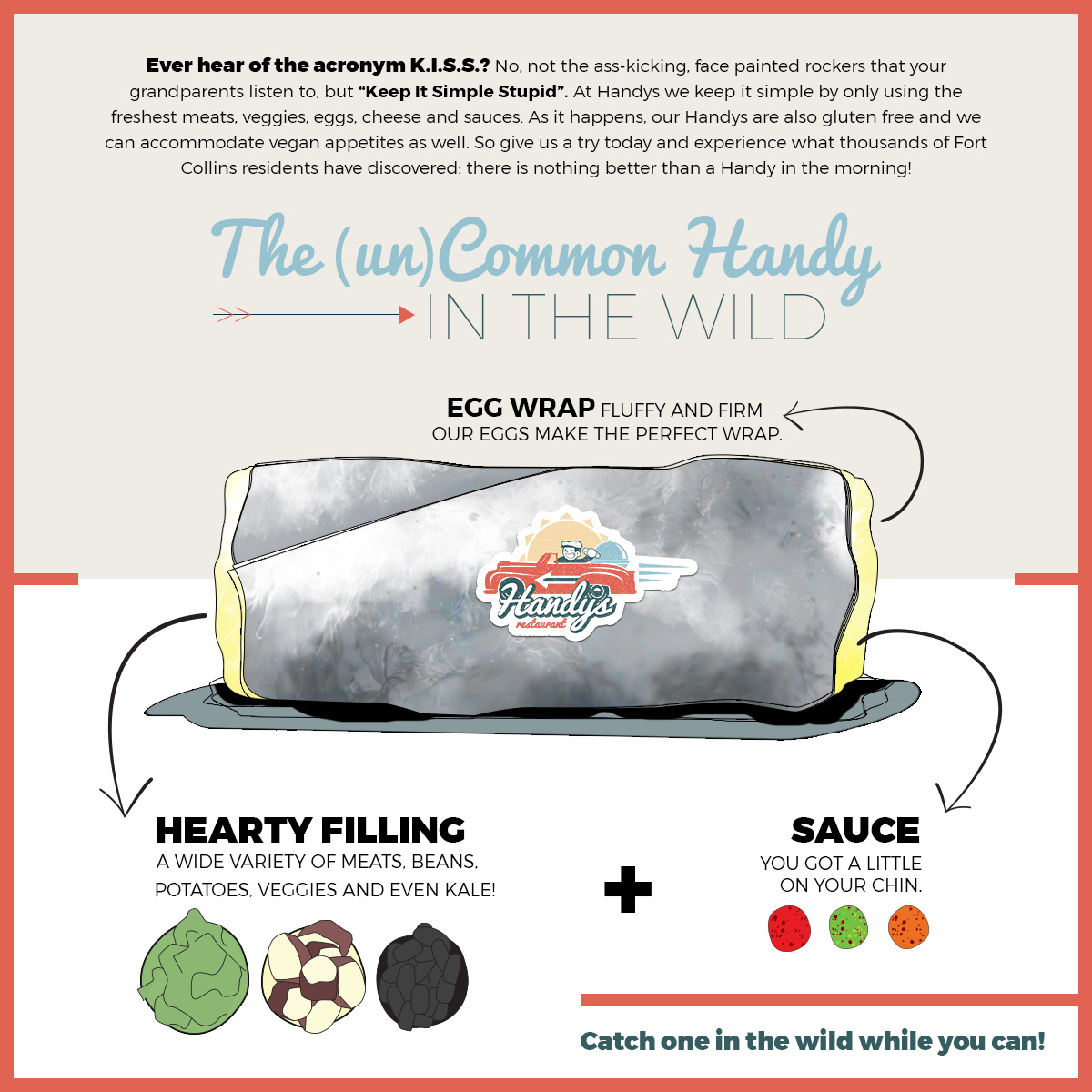 No matter what day it is, you can start your day with a Handy. We offer a wide variety of specials to give you a reason to get a Handy every day. Bring some in to the office for your colleagues, yeah, even Richard who always has coffee stains on his pants (who wears white anyway?). Giving Handys is just about as good as getting Handys from a generous friend or coworker. Be sure and check out our weekly specials and stay abreast of the special Handys this week! Order your Handy for yourself or your entire office and start off the week right!